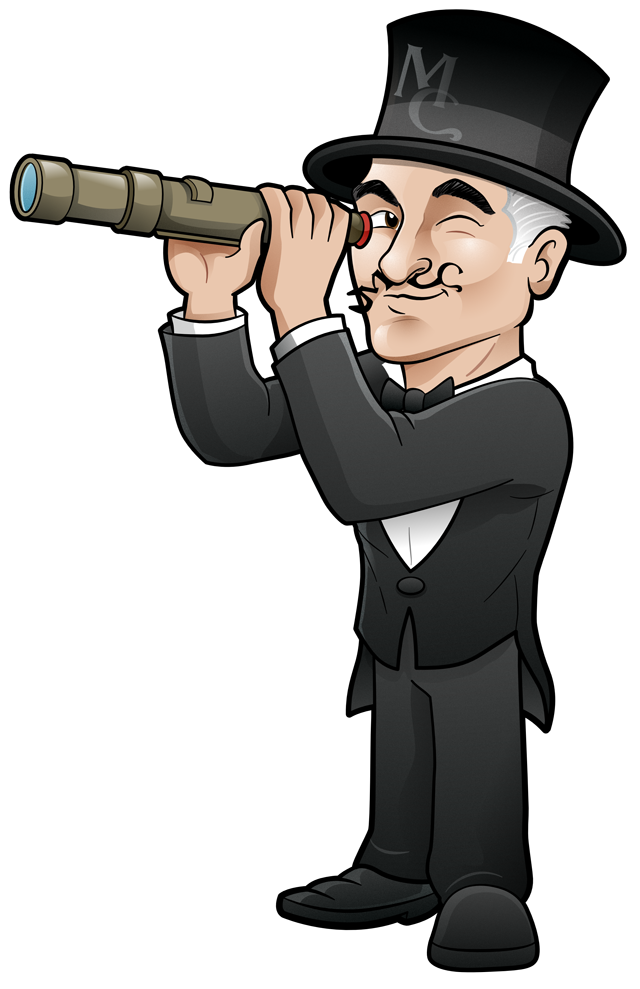 BBT Krauss-Paris 1924 model of pointing telescope used on the Richelieu battleship from 1939. 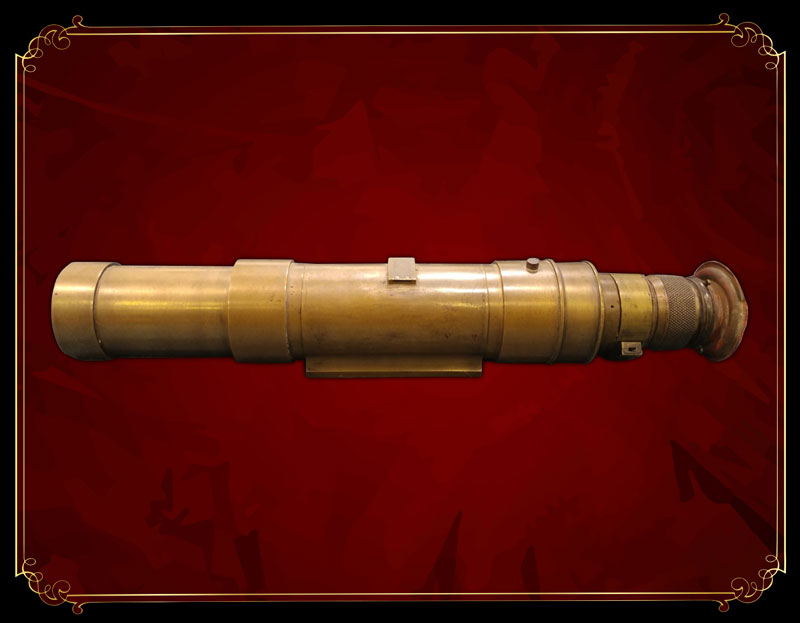 This item is available for sale at Museum concept. Click here for enquiry.

Over 3 years of work and here is the impressive Richelieu battleship, the most powerful and modern ship of the French navy finally completed. Overworked by a tight delivery schedule after many administrative delays, the engineers and workers cheer up, satisfied with the end result while World War II looms. At 248 meters long, a full capacity displacement of 35,000 tons a 30 knots capacity and a maximum crew of 1569, she is already the pride of the French flotilla. 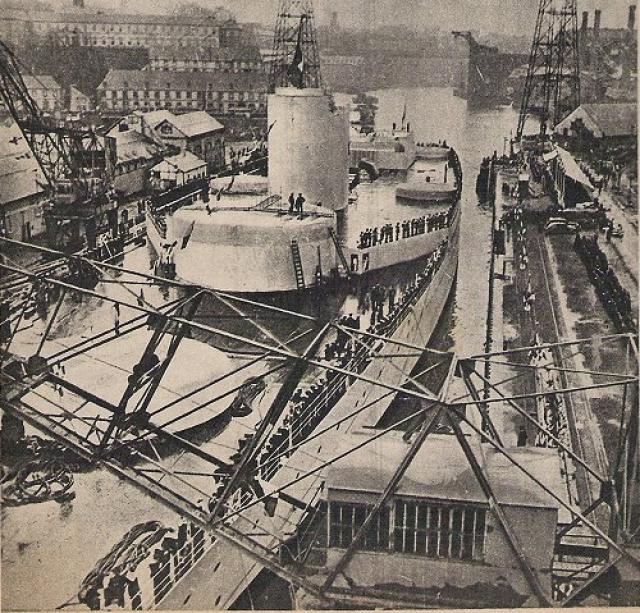 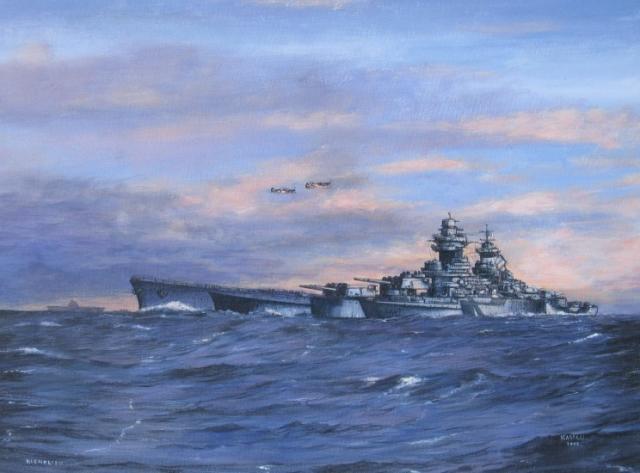 “The German invasion of Poland triggers a declaration of war by Britain and France.” WWII starts while the Richelieu continues her trial runs under army protection in Brest. Stress is felt all around. 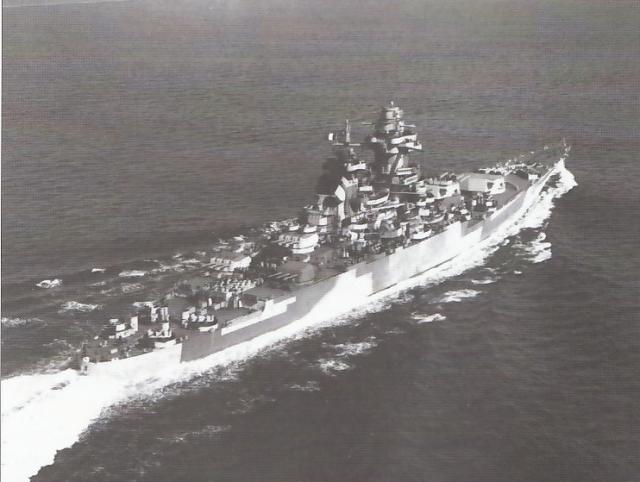 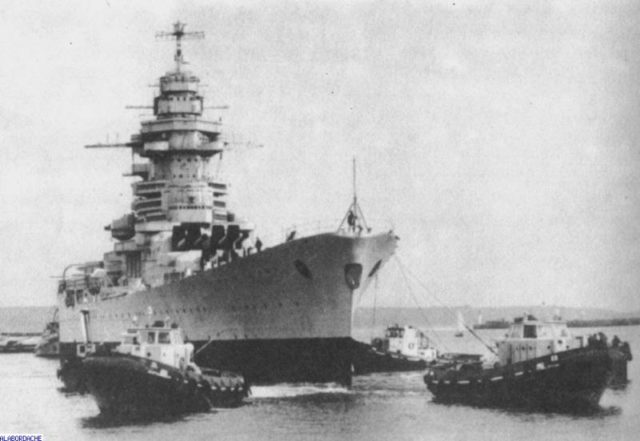 After escaping German “Luftwaffe” aircrafts on June 14, the Richelieu needs to leave France hastily with the German troops advancing fast on Britanny. Not all the needed munitions have been loaded but there is no time to waste. Escorted by two destroyers, and under the commandment of Captain Marzin, her destination is Dakar in French West Africa where some French navy ships were already based. 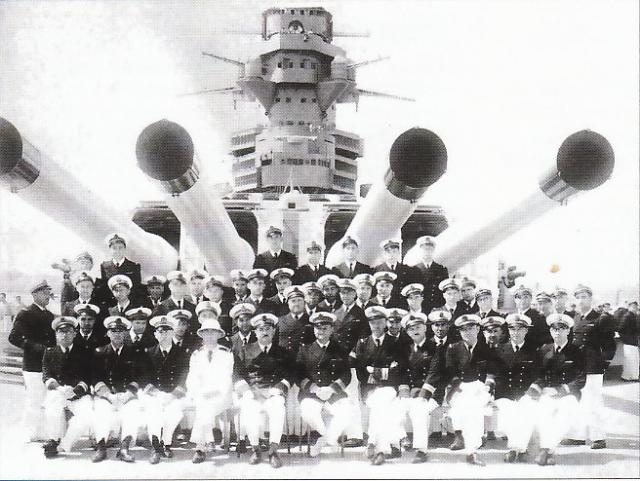 While the Richelieu is arriving in Dakar, an armistice is signed with the Nazis by French prime minister Marshal Petain. As a result, more than half of France is occupied by the Germans. “Petain creates the Vichy government and collaborates with the Nazis.” From England, French General Charles de Gaulle, who was not yet very well known, made a radio broadcast urging his countrymen to keep on fighting against Nazi Germany. 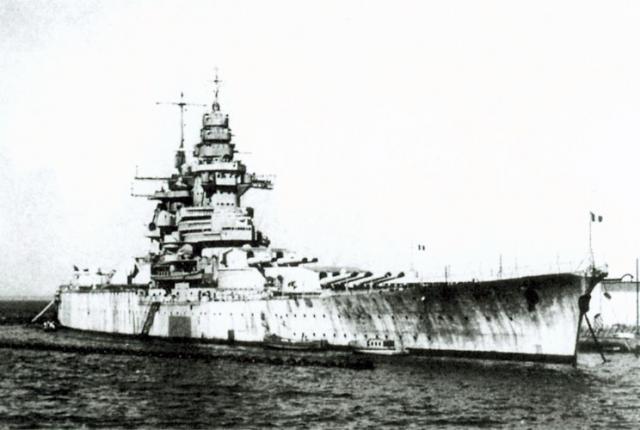 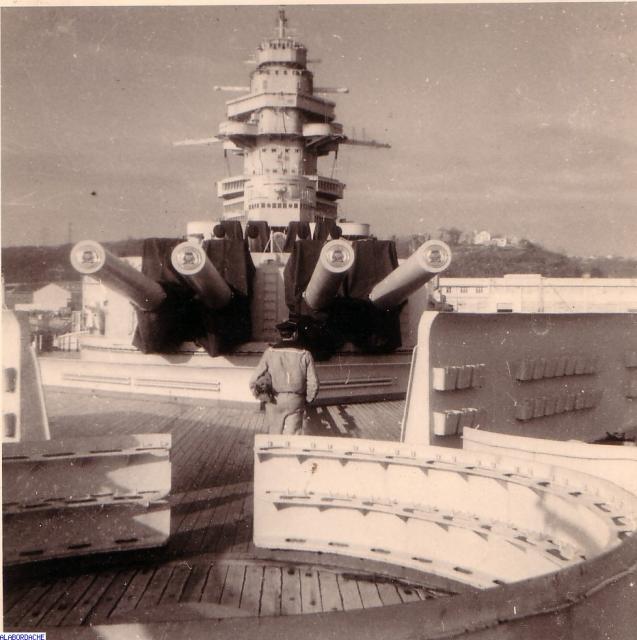 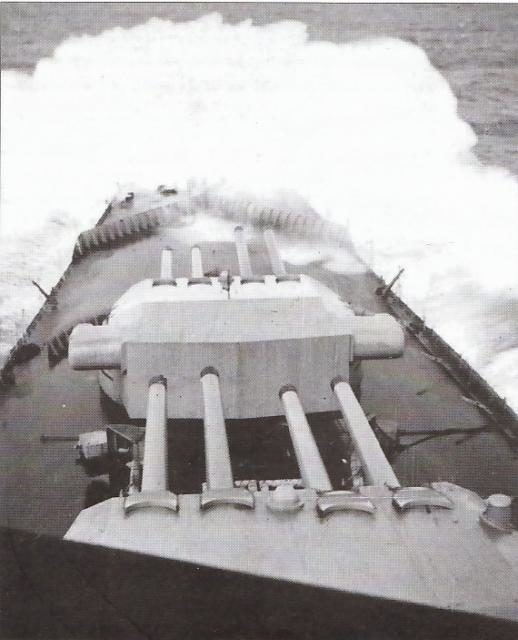 Five days ago, the British government, with the prospect of the Germans seizing control of the French fleet and the Vichy state not giving any guarantees, controversially bombed the French Navy, after an ultimatum, in Mers-el-Kébir, French Algéria, resulting in the death of 1,297 French servicemen. In the early morning, six Fairey Swordfish torpedo bombers from HMS Hermes attacked the Richelieu. A torpedo explodes against the starboard of the Richelieu. Fortunately, no one is hurt and the pumping and repairing can start. An engineered “metal plaster” will finally close up the 9.3 m x 8.5 m hole later in September.

How ironic it is to see France fighting its former allies! A fleet of British and Free French forces with the General de Gaulle tries again to retake the control of the French Navy ships in Dakar still faithful to the puppet government of Vichy. The Richelieu opens fire against the British battleships and suffers an explosion of her own shells. Many damages are done to the British warships as well and they decide to retreat once again. 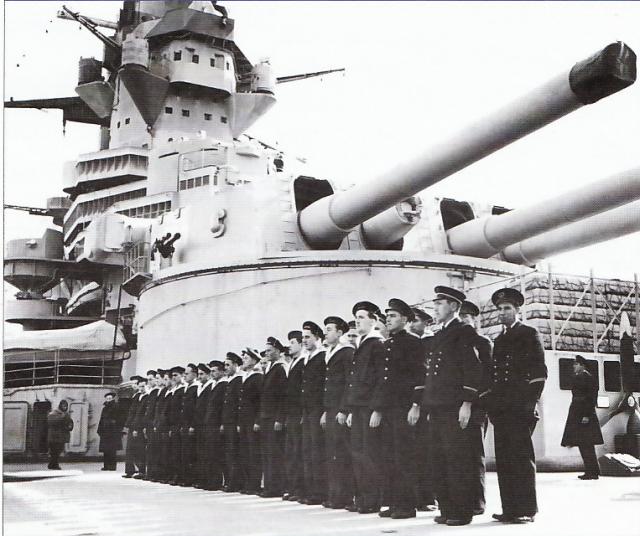 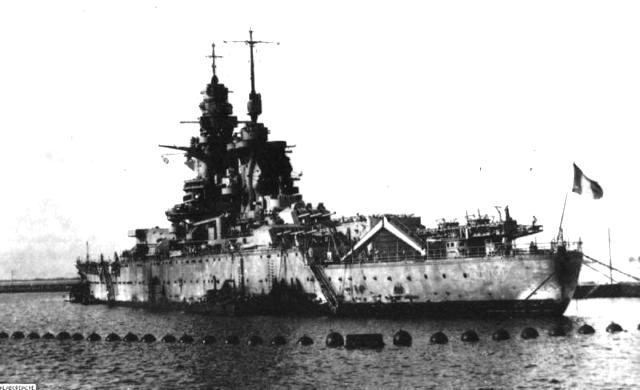 “Breaking news! Commanded by American General Dwight D. Eisenhower, Allied forces invade North Africa via Morocco, Tunisia, and Algeria. An agreement is reached that the French forces in West Africa would join the Allies at last. The Richelieu is finally back in the right camp and can start looking forward to helping the Allies war efforts.”

Today, the Richelieu arrives in New York where it will be refitted for further service. Yesterday, the uppermost fire control director on the fore tower had to be dismantled for her to pass under the Brooklyn Bridge now. The local crowd gives a warm welcome to the battleship and her sailors. Over 2,000 workers will work on the overhaul at the Brooklyn Navy Yard. 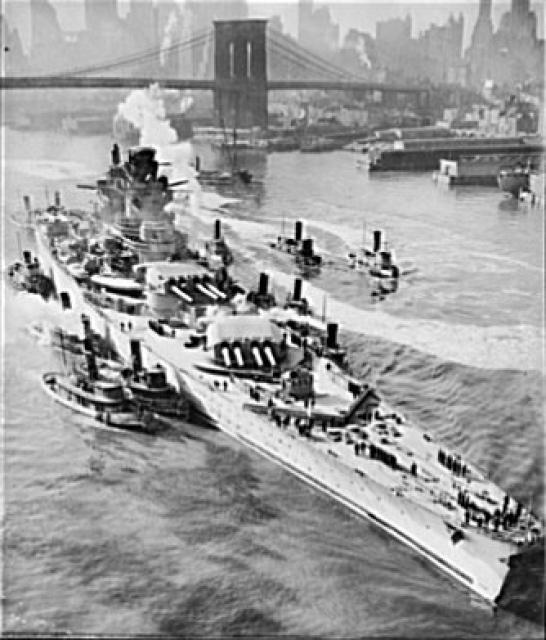 Back to Europe, and very cold and dark on this February day, the Richelieu participates in Operation Posthorn in Norway, covering the British fleet aircraft carriers sent to attack the German battleship, Tirpitz. 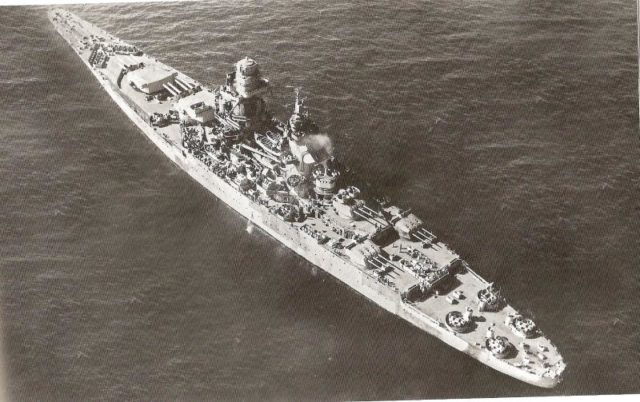 Much warmer now that the Richelieu has been designated to join the British Eastern Fleet in the Indian Ocean. Here is the coast of Trincomalee, Ceylon emerging ahead. In coming days, the battleship will join the attack on Port-Blair (Andaman, India) as well as Sabang and Surabaya in Indonesia in order to fight the Japanese occupation. 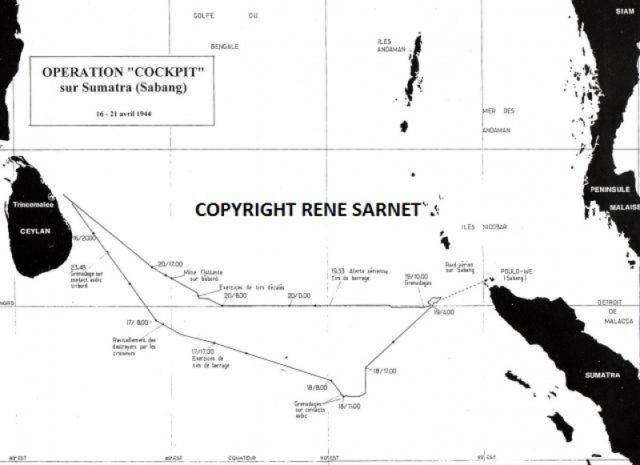 The visit of Admiral Louis Mountbatten, Supreme Allied Commander of the South-East Asia Force last year is still in everyone’s memory. Missions in Indonesia and India have also been quite successful. “But today a great news is waiting for the crew. Three days ago, Imperial Japan surrendered!” Emperor Hirohito confirmed the Termination of the War in a broadcasted speech to the nation from the Imperial Palace in Tokyo. “The joy is everywhere on board, the war is over!!!” 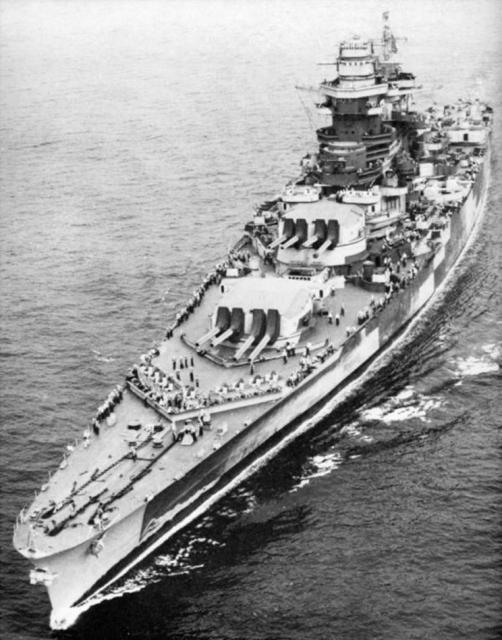 Finally, Singapore is in sight and the tropical rain won’t affect the happiness felt by the crew to reach their destination. Two days ago in the early morning, down the Straits of Malacca, a magnetic mine exploded 17 meters to starboard shaking the Richelieu which once again escaped slightly damaged but with no casualties. Tomorrow the commanding officer, beside General Leclerc, will take part in the ceremony during which General Itagaki will officially surrender to Admiral Mountbatten on behalf of the Japanese forces in South East Asia. 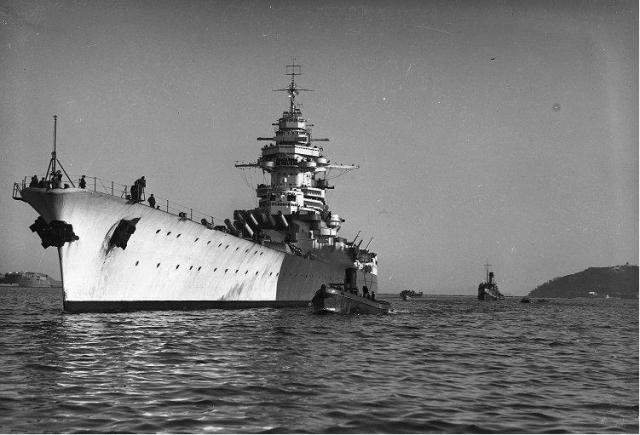 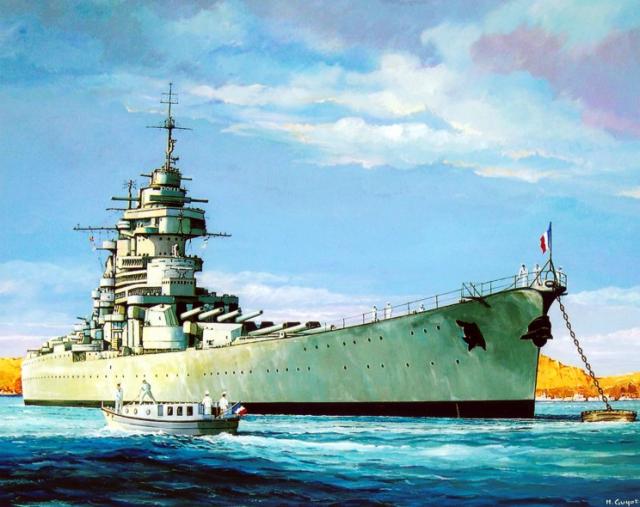 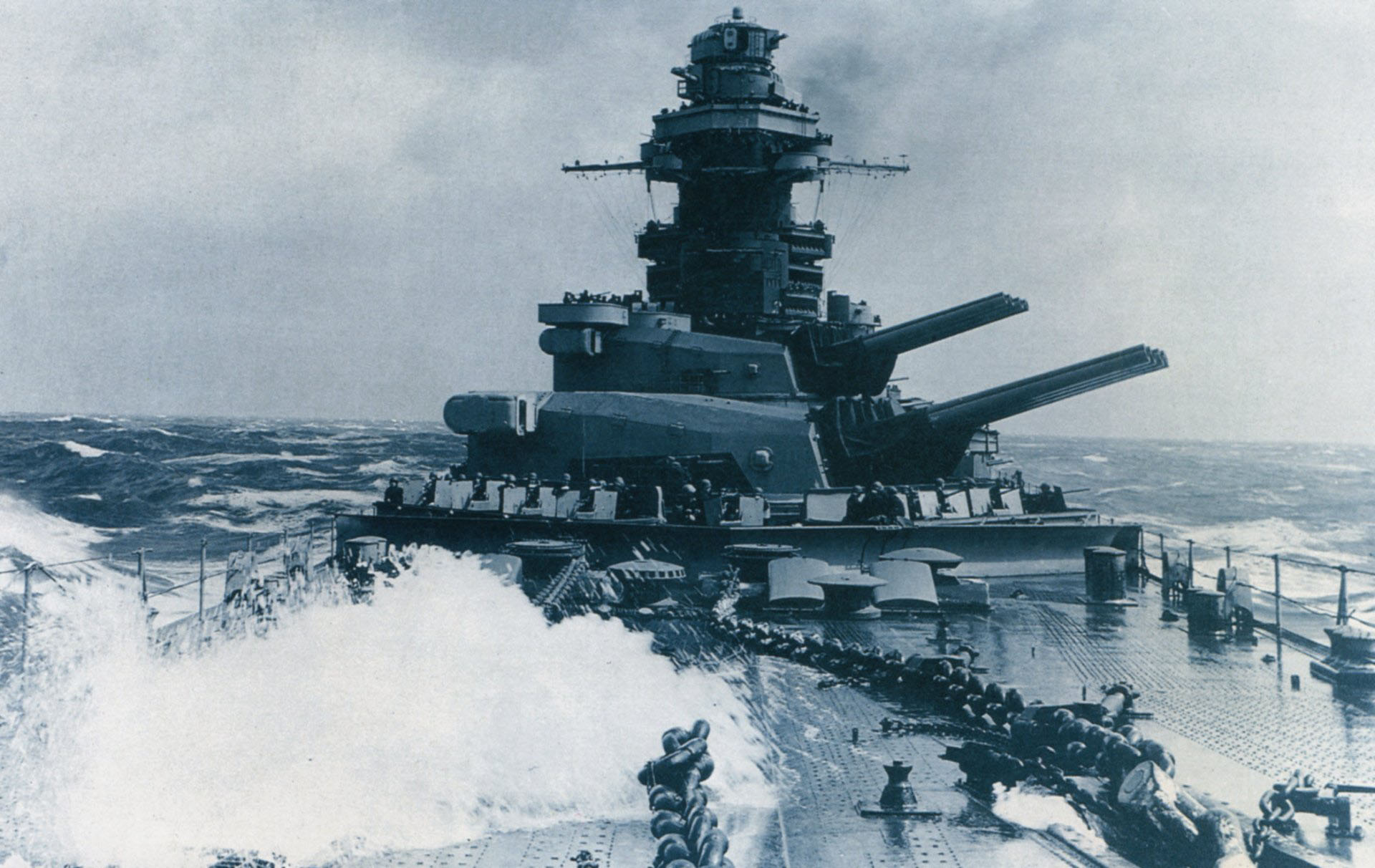 “An extraordinary destiny on the two sides of war for the Richelieu, a lesson in History” 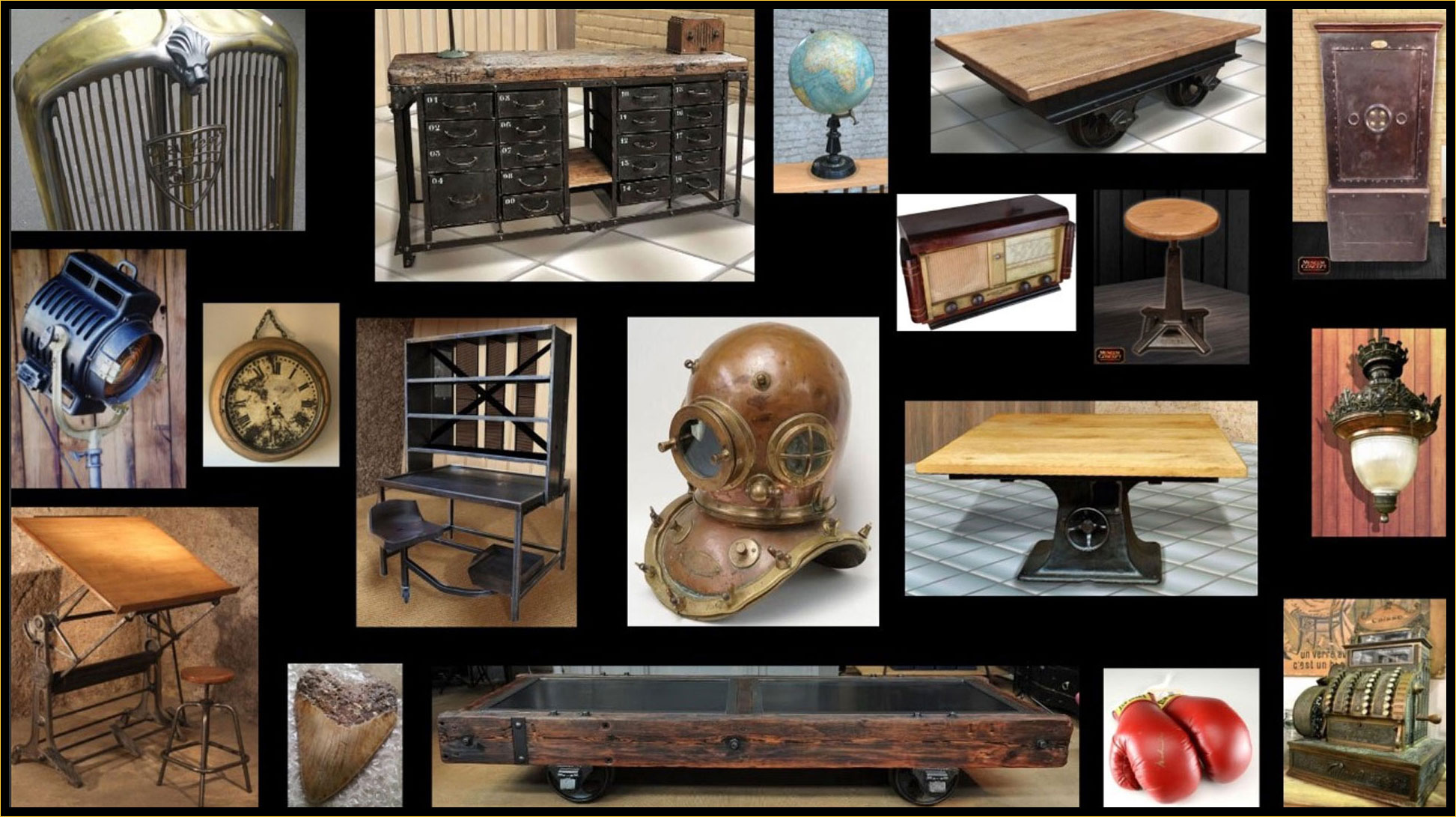